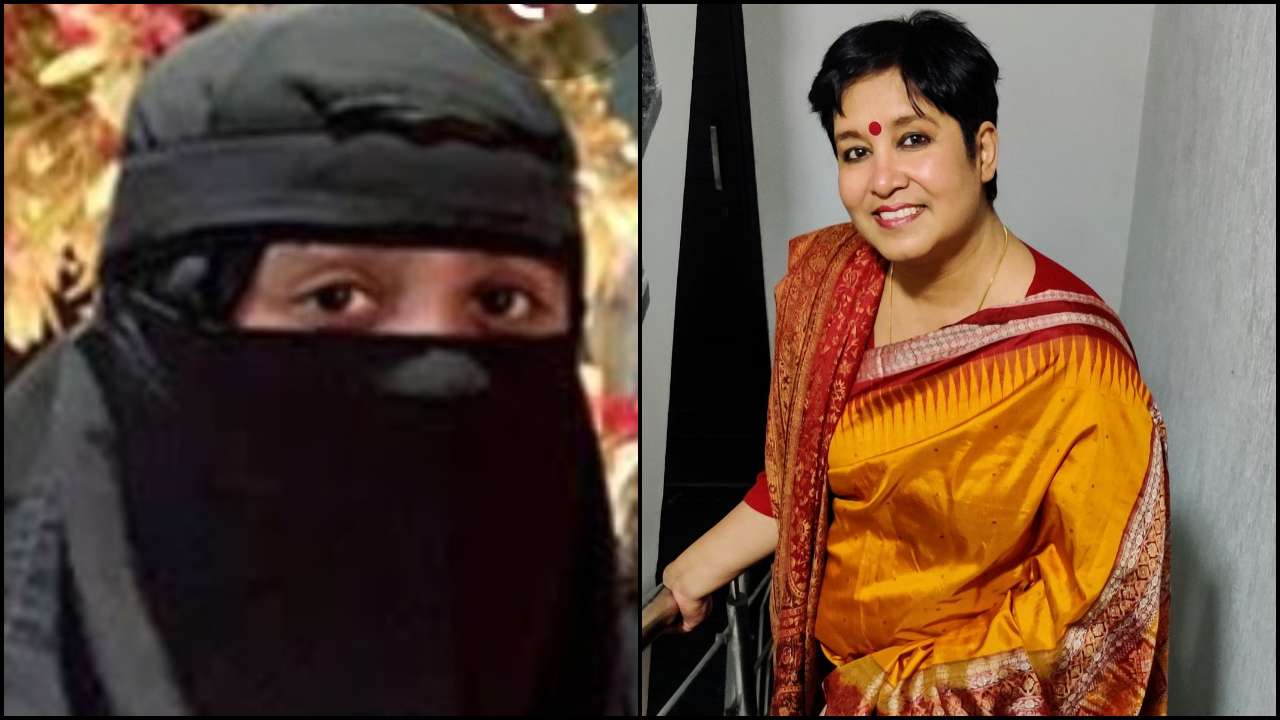 AR Rahman's daughter Khatija Rahman has silenced author Taslima Nasreen after the two engaged in a sharp exchange on social media regarding the former's decision to wear a burqa.

Through a series of Instagram posts, Rahman slammed Nasreen after she criticised her for wearing a burqa.

The spar started a few days back when the writer shared a photo of Khatija in a burqa on Twitter and wrote, "I love A R Rahman's music. But whenever I see his dear daughter, I feel suffocated. It is depressing to learn that even educated women in a cultural family can get brainwashed very easily!"

This did not go well with Khatija and she responded by sharing a series of posts on her Instagram page, telling Taslim to get some fresh air if she finds it suffocating.

"Image credits - google Don't ever mistake my silence for ignorance, my calmness for acceptance, or my kindness for weakness - Carson Kolhoff, To my dearest folks who seem suffocated. Please go and get some fresh air," she wrote in the first post, that had a picture of fire.

She then went on to share a screenshot of Taslima's tweet stating that she never sent the writer her photo to be used in the first place. The caption read, "Been only a year and this topic is in the rounds again..there's so much happening in the country and all people are concerned about is the piece of attire a woman wants to wear. Wow, I'm quite startled. Every time this topic comes, the fire in me rages and makes me want to say a lot of things... Over the last year, I've found a different version of myself which I haven't seen in so many years. I will not be weak or regret the choices I've made in life. I am happy and proud of what I do and thanks to those who have accepted me the way I am. My work will speak, God willing... I don't wish to say any further. To those of you who feel why I'm even bringing this up and explaining myself, sadly it so happens and one has to speak for oneself, that's why I'm doing it..."

Targeting Nasreen specifically, the second half of the caption read, "Dear Taslima Nasreen, I'm sorry you feel suffocated by my attire. Please get some fresh air, cause I don't feel suffocated rather I'm proud and empowered for what I stand for. I suggest you google up what true feminism means because it isn't bashing other women down nor bringing their fathers into the issue. I also don't recall sending my photos to you for your perusal."

After getting support from netizens, Khatija thanked them and also asked not to abuse or troll Taslima. "I'm overwhelmed by the love and support I've got once again. Thank you all. I request you all not to abuse or make any hate speech against Ms Taslima. Let's strive to become a broad-minded society in accepting the choices our fellow human beings make and also remember Ms Taslima in our prayers and not judge her for the choices she's made in life. Peace," she wrote.

Khatija concluded by posting a photo of a burqa-clad woman with a caption stating, "Image source - Google. Why the double standards and sudden concerns only when it comes to women belonging to a certain faith? Haven't we seen men wearing turbans? Women wearing habits? Why only when it comes to a particular faith are women targeted for the choices they make wholeheartedly and with pride. Why? Why? And why? I simply do not understand."

Khatija often shares photos with her family in which she is always seen in a burqa and looks proud of it too.

For the third or fourth day in a row, bulls have decisively taken control of the cryptocurrency market. Leading the pack wasn't Bitcoin or Ethereum (ETH), it was XRP, the third-largest cryptocurrency by market capitalization and an asset that is either despised or ...

BMW thinks that we'd like to interact with our cars in a more humane way than we do today, engaging it in conversation. But that's never just using words, but with gestures, body language, and our gaze, which we use to convey meaning to one another.

The vortex of rumor and leak that affects the next-gen acquires power day after day. In the ocean of rumors, one of the most interesting concerns Xbox Series X and in particular the possibility of using external applications with the new Microsoft console.

Remember 2019? Yeah, those were the days. I remember it like it was just a couple of weeks ago. Anyway, remember the 2019 Store Wars? And how they were going to ruin. In case you were lucky enough to miss the whole Store Wars business (and I'm ...

'Punjab ki Katrina Kaif' Shehnaaz Gill ended her Bigg Boss 13 journey at the third spot. While her bestie Sidharth Shukla won the title, Asim Riaz was declared the first runner up. The actor-singer was

A half-term break in Spain seemed just the ticket. The weather wasn't kind, but at least a rented Land Rover lived up to expectations He seemed adamant. "There's no way this boot is

Bharti Airtel has paid ₹10,000 crore to the Department of Telecommunications (DoT) END_OF_DOCUMENT_TOKEN_TO_BE_REPLACED